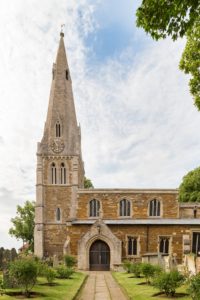 The village is recorded in the Doomsday Book, but for much of its life it has been the property of the church being given by Etherlred, King of Mercia to the Abbott of Peterborough about 700 A.D. However, all the charters depicting that were destroyed during the Danish invasion. This style of ownership means the village has never had the traditional local squire, just tenants.

It appears as though the village has been occupied for more than 2000 years as items such as flint tools from the stone age, occasional Iron age pottery, Roman pottery and building material from 1st to the 4th Century and some Saxon pottery have all been found.

The oldest building in the village is the Church which is mainly 13th century and built out of ironstone as are a number of other buildings. Many of these are from the 17th century, but there are also a significant number of properties now built using a wide variety of materials using generic designs available to developers at the time and do not reflect local materials. Other houses within the village use brick, as well as limestone and render.

In times past, the village had 5 pubs and several shops, where now there is one of each. However, Great Easton is a thriving village with a plethora of clubs, societies and local businesses and you will find all the valuable information about them and the community on this website.